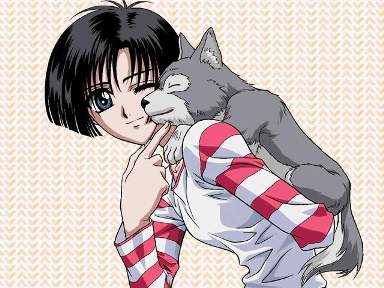 Nekoi Yuzuriha is a 14-year old schoolgirl descended from the keepers of the Mitsumine Shrine, masters of Inugami, dog spirits. She is attended by her own personal Inugami, Inuki, who is invisible to any but others with occult powers. Energetic and kind, she is able to defuse many of the latent tensions among the Dragons of Heaven and especially between them and Kamui. Before she comes to Tokyo no one outside of her immediate family is able to see Inuki, but when she gets there the first person who sees him is the Dragon of Earth Shiyuu Kusanagi, and she falls in love with him.

In combat she makes use of Inuki, who can attack with great speed, and can additionally transform himself into a sword which Yuzuriha can use. Her barrier field has the shape of a cylinder.

Yuzuriha also appears in Tsubasa Chronicle, first as a player in the virtual reality world of Edonis paired with Kusanagi, and again in Tokyo Revelations as a fighter with the Tower faction.