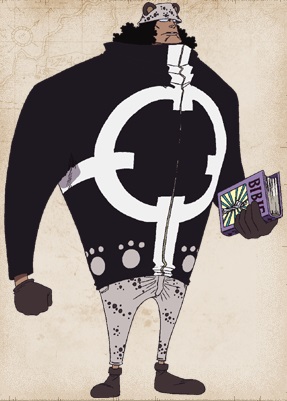 Bartholomew Kuma is a Shichibukai and former revolutionary with a bounty of Bsymbol. He was once feared as an extremely vicious pirate, earning himself the title "Tyrant". He is a type of cyborg called "Pacifista" developed by Dr. Vegapunk. Once Vegapunk finished his modifications on Kuma, the Shichibukai was converted into the first complete Pacifista cyborg with the serial PX-0, figuratively dying in the process. He was a very influential character during the Whitebeard War Saga, setting the stage for Luffy`s appearance in Amazon Lily, Impel Down, and Marineford. He has saved and defeated the Straw Hat Pirates on two occasions, and protected the Thousand Sunny during their two-year absence by making a deal with Vegapunk to have that mission programmed as his primary objective.