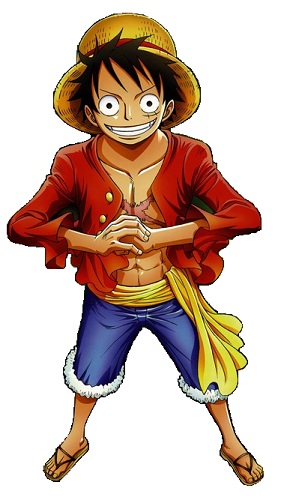 Monkey D. Luffy is a fictional character and the main protagonist in the anime and manga series One Piece created by Oda Eiichiro. He is a boy whose body is made of rubber after he ate a devil`s fruit and acquired the accursed ability.

In the anime and manga, Luffy is captain of the Straw Hat Pirates, a group of pirates he assembles himself as he quests to find the "One Piece" and become the King of the Pirates. His primary motivation throughout the series is to reach the goal with all of his comrades, a task he pursues no matter what stands in his way. While he is goofy and reckless, he gets quite serious when anyone is in serious danger, notably his crew, whom he considers his friends. Luffy has additionally appeared in all of the featured movies in the series and other media relating to the series, including several video games and specials.