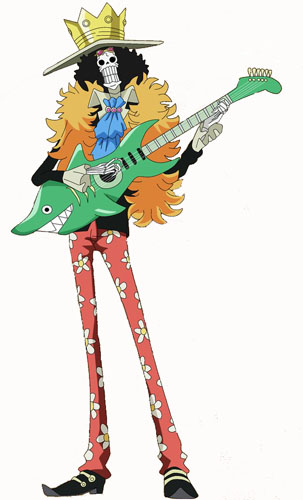 Brook is the musician of the Straw Hat Pirates. He is a skeleton the Straw Hats found on board a ghost ship after drifting into the Florian Triangle. He is a Devil Fruit user who ate the Yomi Yomi no Mi and is an undead being brought back into a pseudo-immortal state because of its powers. He is the ninth member of the Straw Hat crew and the eighth to join Luffy`s crew. He is also one of the two swordsmen onboard their current ship with the other being Zoro. He fills the role of the long awaited musician that Luffy wanted for his crew since his journey began. He has a bounty of 33,000,000 Berry.