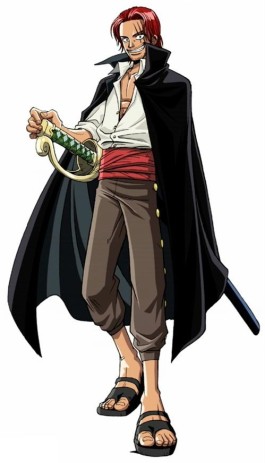 Captain Shanks, nicknamed "Red-Haired" Shanks, is the captain of the Red-Haired Pirates and one of the Four Emperors. Shanks is one of the most laid back characters in the world of One Piece, preferring to take his time as he and his crew travels around the world rather than rushing from one place to another. Shanks isn`t cruel like many other pirate captains, nor does he rule over his crew with fear to gain respect. His friendly nature means he won`t purposely seek to harm others. Shanks doesn`t seem to mind what happens to himself; he`ll take others throwing food and drink or spitting on him without fighting back and laugh with his crew at his own misfortunes. However he would never forgive anyone for attacking a friend. Shanks is a former member of the Roger Pirates, where he had a rivalry with Buggy.ch. At the beginning of the series, Shanks loses his left arm while saving 7-year-old Luffy`s life, and afterwards entrusts the boy with his favorite straw hat.ch. Shanks is a skilled swordsman. Before he lost his arm, he used to have frequent duels with Dracule Mihawk. He also has King Ambition, which allows him to render beings of weak determination in his proximity unconscious. Shanks recently appeared during the Battle of Marineford, with the purpose of bringing it to an end.ch. Oda states that Shanks is the One Piece character that most resembles himself, because of his fun-loving, partying nature.