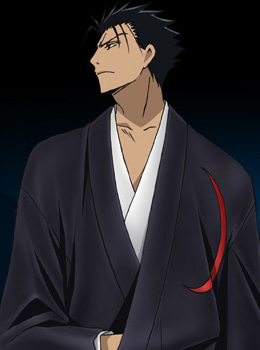 A rough-mannered ninja from the world of Nihon, a world based on ancient (Japan), exiled for his recklessness. He originally possessed the replica of Ginryuu, a sword, before giving it to Yuuko as price for his deal with her. He obtained a new sword in Ooto called the Souhi, and taught Shaoran the skills of sword fighting and sensing attacks from the left. In the grand scheme of the series, he is considered `Yuuko`s pawn`. Fei Wong Reed murdered Kurogane`s mother in an attempt to make a deal with him, his servitude for the return of his mother. However, this plan was thwarted by Yuuko and Tomoyo when Yuuko warns Tomoyo of this event. This warning leads to Tomoyo ending Kurogane`s mad rampage and Kurogane becoming one of her ninjas. He also acquired the Ginryuu replica from Tomoyo as the original was to be buried with his mother in place of his father`s corpse.