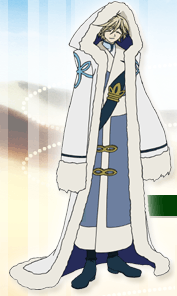 A laid-back mage from the Country of Selece. He is on the run from King Ashura (a crossover character from RG Veda), whom he put into a near-eternal slumber. Although he seems happy-go-lucky and pretends to know less than he does, there is more to him than meets the eye. His assistant in Selece, currently guarding against the awakening of Ashura, is a very organic-looking Chii (a crossover character from the series Chobits) It is also revealed that Fay created Chii according to his mother`s looks.