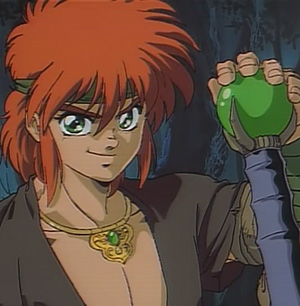 The young king of the dragon tribe of the west, Ryuu-Ou reluctantly inherited the throne since his grandfather was too sick to continue ruling. He joined Yasha-Ou, Ashura, and Souma after they accidentally ended up in his kingdom, in the hopes of getting a chance to fight against Yasha-Ou, the strongest warrior in Heaven. Ryuu-Ou wields the Ryuu clan`s king`s sword Ryuuga-tou (Dragon Fang sword) that controls water and can smash rocks despite being entirely blunt. When revealed to be one of the Six Stars, he decides to stick with the others despite the risk to his clan, even though he is the only one not holding a personal grudge against Taishakuten.

He is killed by the true Ashura right after the latter awakens. His real name is Naga, having taken on the name of Ryuu-Ou when he became the leader of his tribe.