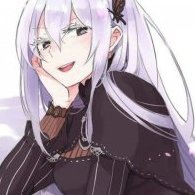 I don't think there is already an art club, and since I don't have anywhere else to confidently share my drawings, I feel like there might be other people in the same boat. Please feel free to share your art and discuss whatever you'd like.