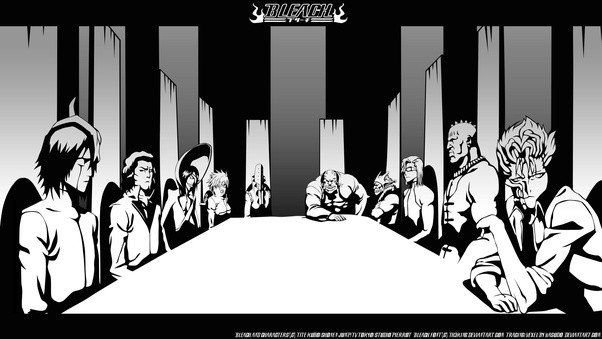 Yammy Rialgo is the 10th strongest Espada in Aizen's Arrancar army prior to releasing his zanpakuto. Yammy usually uses brute strength and Ulquiorra's directions to fight his opponents. He has not revealed his zanpakuto as of yet.

Aaroniero Arruruerie a character from the manga and anime Bleach. He is the 9th Espada and the only Espada of the Gillian class.

Szayel Aporro Granz is a character in the manga and anime Bleach. He is the 8th Espada in Sosuke Aizen's Army of Arrancar. His Zanpakuto is called Fornicaras.

Zommari Leroux was the 7th Espada who had the title for the fastest Sonido.

A character from the manga and anime series Bleach, Grimmjow is the 6th Espada of the Arrancar army. On the bottom part of his cheek is the remains of a hollow mask.

Also known as Nnoitra Jiruga.He is a powerful and vicious arrancar, and is the 5th Espada in Aizen's Arrancar Army. His tattoo is located on his tongue and his hollow hole is under his eyepatch. He is the most arrogant member of the team. He is also quite sadistic. His resurrection is called Santa Teresa.

Ulquiorra is an Arrancar in Sōsuke Aizen's army. He is also the 4th Espada. You can see the leftovers from a hollow mask on the top left side of his head.

Tier Harribel is the ruler of Hueco Mundo after Aizen's defeat, and she was the Tercera Espada, the third most powerful Arrancar of the Espada.

Baraggan Luisenbarn was once the God-Emperor of Hueco Mundo until Sosuke Aizen invaded. He eventually went on to become one of the Espada and "served" under Aizen, but at the same time, he also made a promise to himself that he would one day kill Aizen no matter what. He was ranked as the second Espada.

The Primera Espada that cares little of the matters that go on in Hueco Mundo. His resurrection is called Los Lobos.

There are no comments to display.