Do anime reviews and ratings change your perspective on a particular anime? What anime was better than you expected? 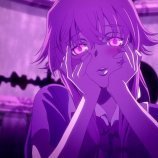 By Momoki
August 8, 2019 in Anime Discussion