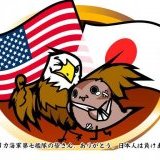 By The History Kid, October 10, 2019 in Historical Topics